“ANYTIME | ALL THE TIME | EVERYTIME” 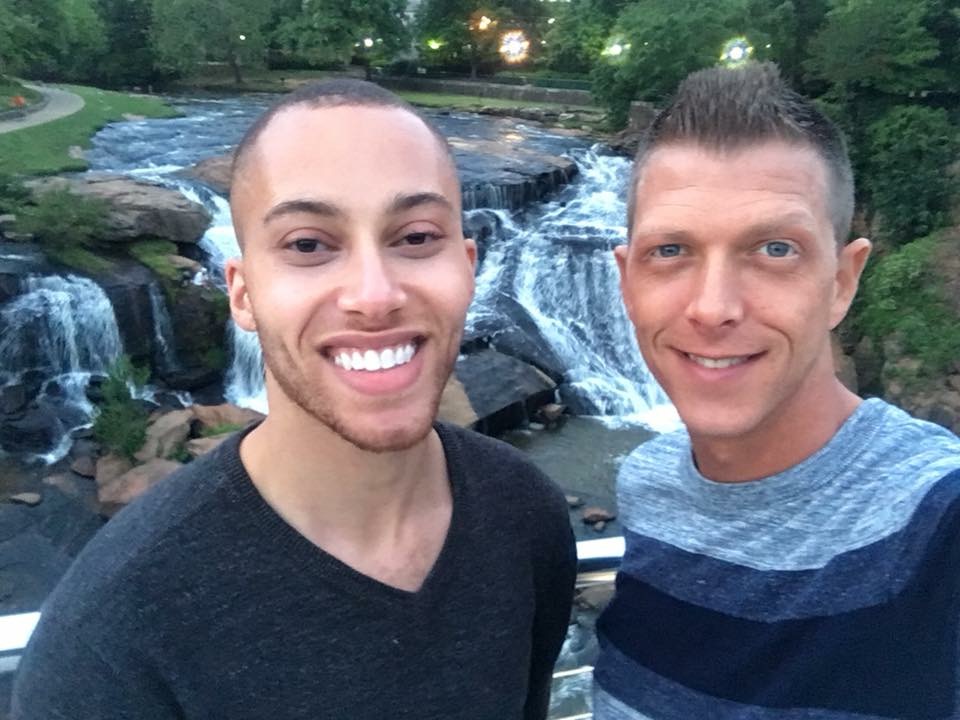 Early Goat Coffee Co. was founded in 2018, by two southern boys with a calling to do something helpful for their community.

Born and raised in Travelers Rest, SC, Troy Styles spent over ten years traveling the globe in hopes of experiencing every culture in it’s raw form. Damian, who while attending college at the University of Alabama – Birmingham, traveled to Travelers Rest, SC to visit his late uncle during the last weeks of his life. The two met and quickly became inseparable.

After his world travels, Troy had gained a new perspective on how others lived and what makes people tick. Venturing into the coffee business in 2017, was foreign territory, but he says he was up for the challenge of learning and using coffee as a tool to interact with people.

“It was one thing to learn about coffee and how many consumed it each day, but to submerge myself into the culture around coffee was what really brought things full circle.” . Troy and Damian both  wanted to launch a brand that was not specific to just coffee, but something that embraced the similarity and of each culture and the differences among them.”

Damian’s Enters the World of Coffee 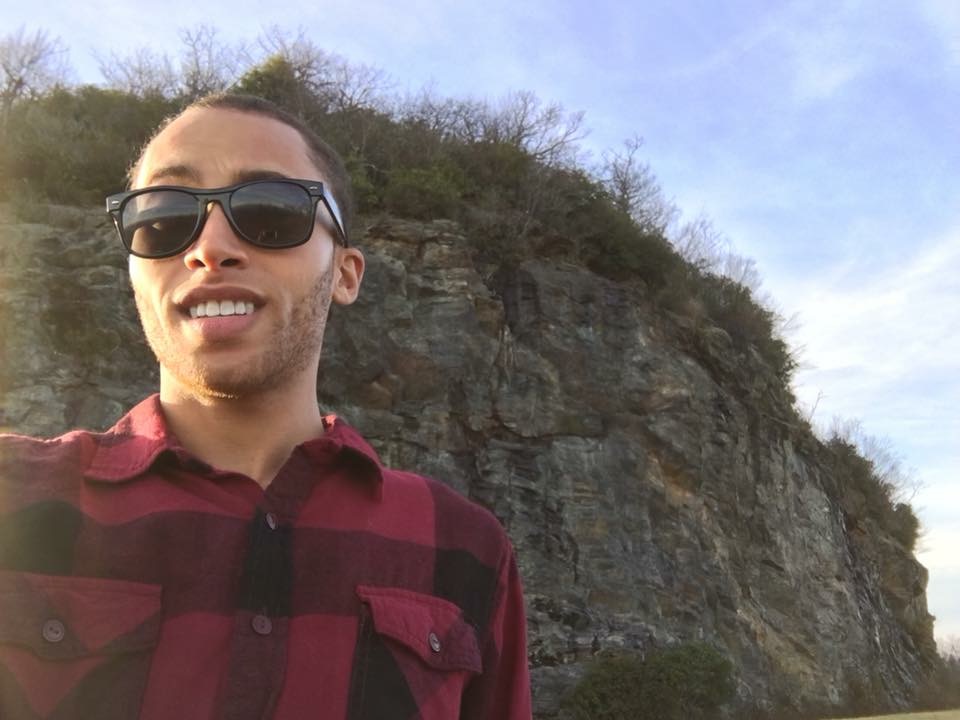 Damian, a native of Huntsville, Alabama and biology major took a great interest in the development and merchandising side of the business since the beginning.

With Damian’s eye for marketing and devotion to detail, and Troy’s jet-fueled passion and operational experience, the two have paired to consequently create a high-driven brand in the market.

Damian and Troy have worked together to build the Early Goat Coffee Co. brand from the ground up. “There are challenges in working together as a couple, especially in a new business that is ever evolving and new roles are constantly being defined. We think the open chain of communication and availability we dedicate to our team, is our success.

Damian is very much behind the scenes; he oversees all logistics, roast development, brand growth, and marketing. The two rarely make a decision apart. Troy is responsible for branding, operations, human resources, finances, and community development. Together, they have created a fascinating brand.

Troy and his partner, Damian came up with the name “Early Goat” in early 2017, but it was not and easy go, says Troy. “Damian hated the name at first and said it would never work, but I wanted it to be Early Goat, really bad.” One day as Troy was talking to a friend about the name, Damian said he kind of liked it. The rest is history! 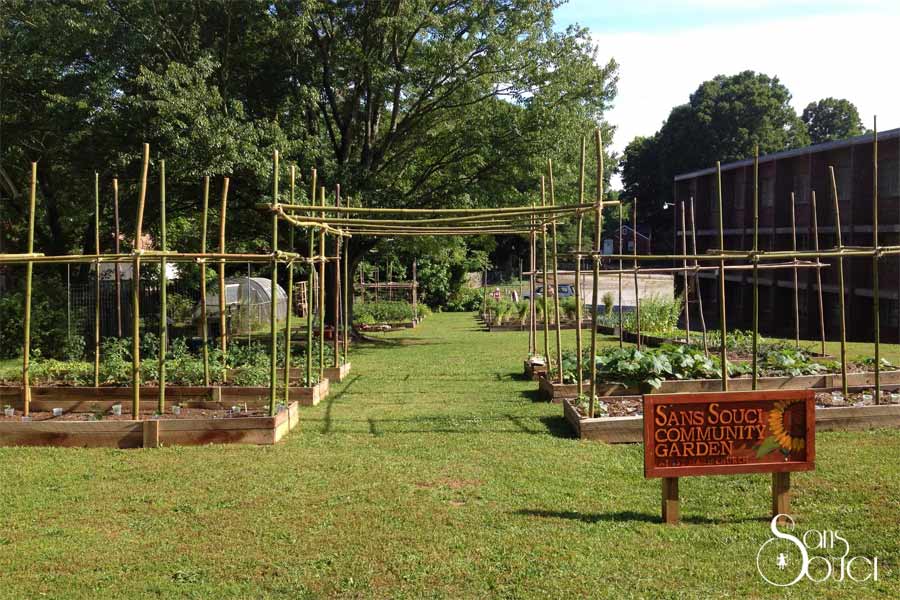 After adopting three small children along with surviving a detriment to his overall health, Troy says nutritional value and sustainable health became factors in their lives and the duo set-out to figure a way to tie the two to coffee. 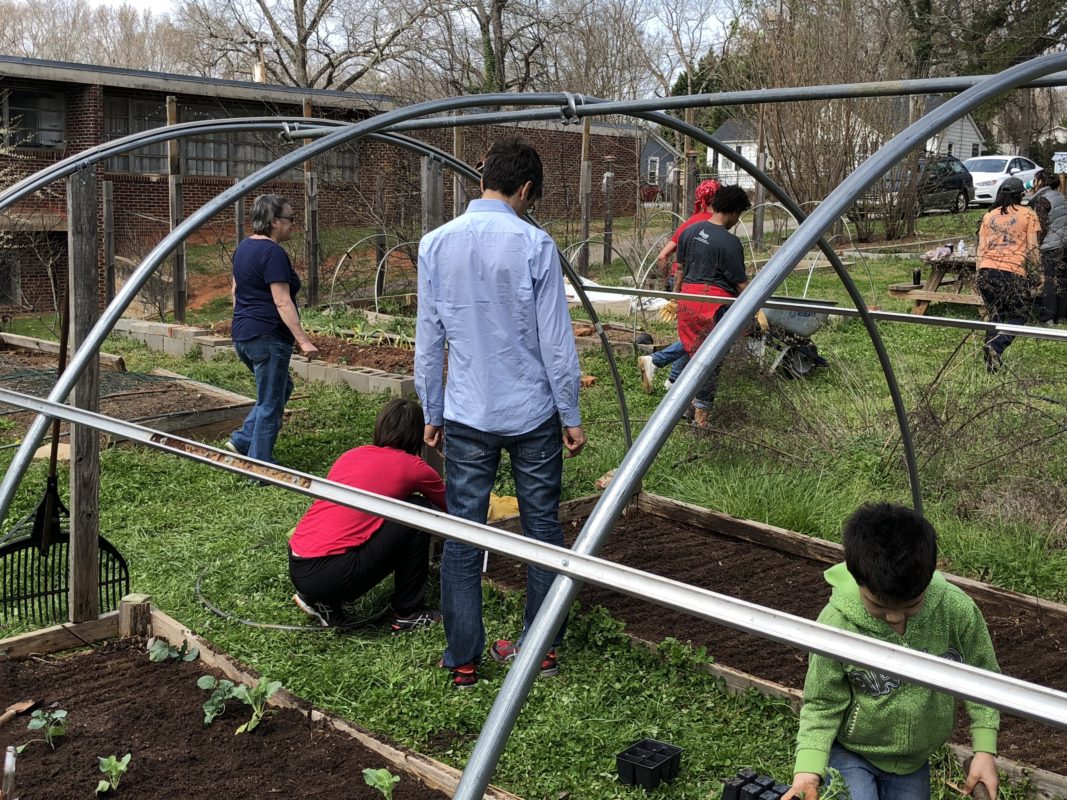 Realizing the needs of the community became a even more powerful calling to do something to help others through coffee.

There, in the “Sans Souci Community Garden,” the idea was born. To open a coffee shop that would serve as a community staple and center for Sans Souci and to also work with local farmers to create a farm-fresh atmosphere for all to enjoy.

The needs are many among Sans Souci. Many of the local local schools are Title I, which is made up mostly of children and youth who face obstacles that categorize them as less likely to finish their education.

The community once made up of textile workers, who have either passed on or still reside is located just a little over one mile from beautiful Downtown Greenville. Many locals are neighbors to transplants these days as more and more outsiders join as locals and embrace the community throughout.

“My goal is to bring people together through coffee; offering art, farm-to-table nutrition, and community involved entertainment to the stage.

Our heart is set on Sans Souci and seeing it flourish!” In 2018, the brand, Early Goat Coffee Co. was born and the boys have since developed a collection of over twenty-five roasts from around the globe.

Troy says, “Now that we have the brand on the market, we have an opportunity to start development of our Early Goat Coffee Cafe in the heart of Sans Souci and will be stepping towards bringing all of our visions together, under one roof.

We will have a stage, produce, coffee, everything fresh! We are planning a weekly, farm-to-table brunch menu and so much more! We can’t wait to bring it to life!” It seems that the locals within this community are anxious and excited to see this vision come to life. It’s doors will be open to everyone, no matter what, who, or their circumstances. 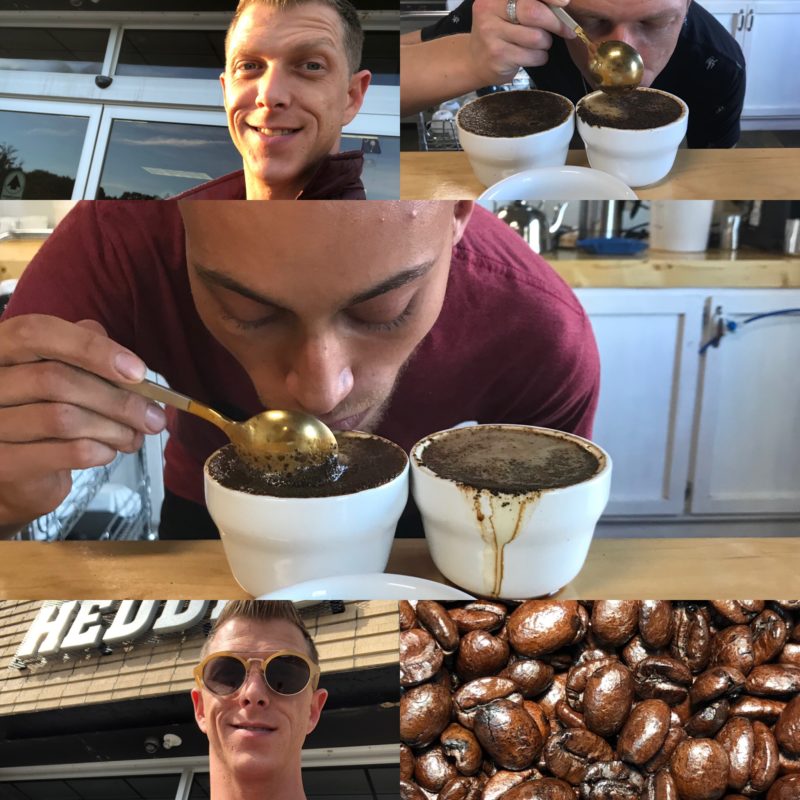 Using their senses accompanied by the standards set out by the Specialty Coffee Association, the two selectively compromise on origin of coffee under their brand is ever evolving.

Together, they personally cup each roast in a table session to compare noted variances in the roasting with a qualified, educated and experienced team of industry professionals before making their final selections.

“We don’t always get it right the first time, but we do not expand our roast collection until we feel we have achieved the exact roast that exemplifies all of beautiful characteristics of a particular green cofee bean.” Damian explains how the standards of cupping each roast is pertinent in the roast development and final selection process.

Early Goat Coffee Co. maintains a strong trade relationship with Ally Coffee, an importer and distributor of specialty coffees from around the globe. “We work very closely with Ally to obtain and uphold buying power from various origins.

They share the same core values and have provided us a great culture to learn coffee and the origins of farmers throughout the process. Them having boots on the ground to facilitate direct-trade relationships with local farmers plays an instrumental role in making sure the chain is paid equally from seed to cup.” There is a major difference in Fair-Trade and Direct-Trade.

THE WORLD OF COFFEE 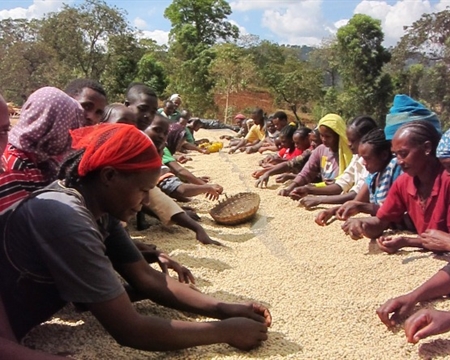 Coffee has been traded since the beginning of time, originating in Ethiopia as early as the 10th century. It has remained one of the highest traded commodities in all of the world. How each culture has evolved coffee is really interesting. The story of Kaldi and his goats is believed to be the originating factor of coffee and how it actually began.

A video below tells the story of the Goat Herder named Kaldi and his dancing goats. It is the legend of coffee and a pretty cool story. For that reason, you’ll notice other goat themed coffee companies.

Since coffees discovery, the green coffee bean has spread throughout the world and its brewing methods have evolved as has its culture. Turkish coffee is brewed in hot sand, Italian coffee is never to-go, and Americans drink coffee all day and well into the night night. Everyone loves coffee, but we all prefer it a certain way.

At Early Goat Coffee Co., we will take you around the globe with coffee. We will teach you how to identify the tasting notes within each roasted coffee and provide you with in depth details surrounding each harvest, its origin, and the process in which it has been prepped for roasting.

“We take a lot of pride in each roast selection.” Specializing in fresh roasted coffee from around the globe, Early Goat Coffee Co. has a dedication to providing legendary customer service along with a perfect cup of coffee.

Founded in 2018, Early Goat Coffee Co. is dedicated to providing you with exclusive, specialty grade coffees from around the globe. 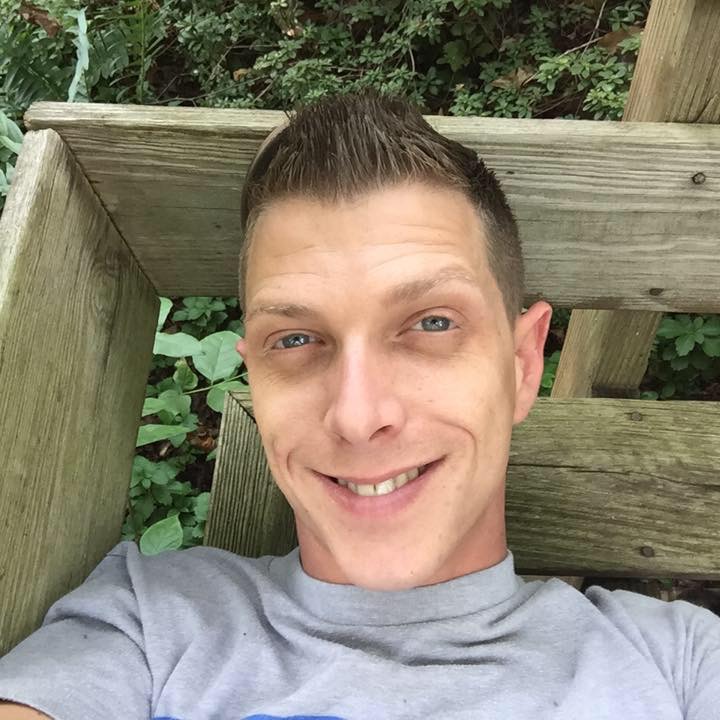 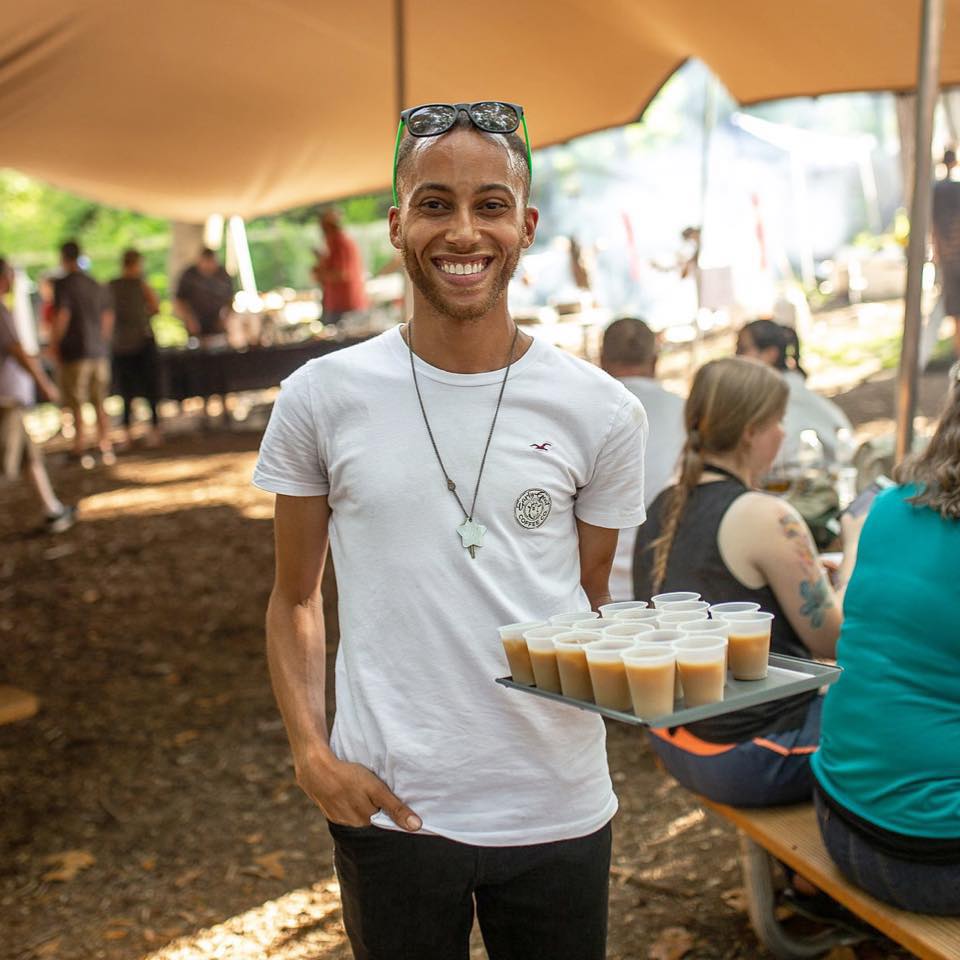